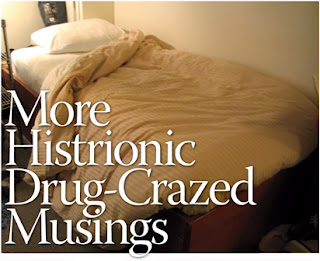 I say this with the little strength I can still muster while I lie in my bed, half-upright, half-comatose, tapping on my notebook. No energy. No exclamation point.

My bones are all achy and creaky, while my breath is ragged and shallow, in between the hymen-breaking coughs that spare me no mercy throughout the day. My nose constantly drips, even as my sinuses are congested. I try to seek relief in sleep, but then I wake up tired and sluggish as if I’ve downed a whole bottle of Rivotril.

So too bad for you, dear readers, there will be no advice to the lovelorn nor intimations of other people’s slutty behavior. I shall bore you instead with ague-laden details of the past three days (I write this on a Tuesday evening) as I lie feverish and pained on my 100-percent jersey cotton bedsheet (yes, the kind that’s used for T-shirts and just what Oprah likes), surrounded by my fluffy pillows which, sadly, now hardly provides me any comfort. And as every sixth hour of my illness is marked by a round of paracetamol (1,000 mg), carbocisteine (500 mg) and antibiotics (625 mg), you can bet that this piece will be chock full of histrionics and drug-crazed musings.

I don’t remember the last time I had been downed by the flu. I’ve been pretty lucky. I hardly get sick despite my lack of exercise and a mostly unhealthy diet. I make up for that by eating lots of veggies now and then, and having seafood every chance I can, walking a distance, and downing loads of vitamins and minerals. Then, as you recall, I did go back to the gym. Which is pretty ironic. Now that I’ve decided on taking the path to a healthier lifestyle, I get the flu! A friend of mine thinks I could have picked up the virus in the shower. Ick! Remind me next time to take a bath at home after my workout.

The illness just crept on me, not giving me any fair warning at all. One day I was up and about doing my yoga poses at the gym, the next day my muscles were sore to the bone, my body wracked with the chills, a cough and the stuffy nose. Of course, in between all that, I had chomped down a whole bagful of cheese-flavored popcorn. And as is the usual, my throat got all scratchy the next day despite the glasses of water I guzzled in between the fistfuls I shoved in my mouth.

Normally, the scratchy throat goes away after I gargle with warm water and salt, and suck on two or three zinc lozenges for a day. This time, it didn’t. I started sneezing like mad, one, two, three blasts in succession. Then my scratchy throat gave way to full-blown hacking. Soon thereafter, my bones were groaning like an old lady’s and the chills started.

It’s driving me mad. I go under the covers for a few hours, trying to seek protection from the cold permeating through my entire anatomy. Then the next minute, I am sweating. I switch on the air conditioner to give me some relief from the mugginess that's making the dogs outside my window pant their poor little tongues out, but also because of the heat that running the course through my poor defenseless remains. Then I get the chills again. What’s worse is that my mouth is always dry, and my taste buds have given up the ghost. Despite the hunger pangs, it’s pure and simple torture not being able to taste any of the food I eat. So I quit after a few spoonfuls. I have no joy.

The last time I got this sick, I was bored out of my wits watching afternoon soaps and endless repetitions of HBO and Star Movies. My saving grace this time around is my torrent downloads of Little Britain, Entourage and Ugly Betty. (Yup, that’s Betty La Fea to you, telenovela fans of yore.) And, of course, I had just finished the much-talked about, endlessly debated finale of The Sopranos. Was Tony whacked or not? (I think he was; after all, that’s how mob bosses are supposed to go. And for someone who has suffered a whiny wife like Carmela, death would surely be a welcome release.)

If not watching my torrents, I am catching up on my reading. Not books, unfortunately, because I can hardly keep my eyes open while I’m shot up with all these drugs, but Vanity Fair. If there is any magazine that you must subscribe to in your entire life, it has to be VF. It has a bit of everything. Heavy investigative pieces of criminal or political activity (yes, crime and politics now seem to be synonymous with each other), lavish spreads of gorgeous celebrities with in-depth interviews, and lots of amusing sections and sidebars along with gorgeous photography. 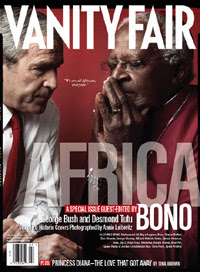 (VF cover of US President George Bush and Archbishop Desmond Tutu of South Africa. Why couldn't I have gotten the George Clooney cover?!)

But here is a spoiler alert: get your copy of the July issue. It’s all about Africa and is guest-edited by Bono, who says he had always wanted to become a journalist. Now how cool is that? I just hope you have more luck than me getting a better cover. (VF shot 20 separate covers for this issue—Oprah Winfrey, Don Cheadle, Madonna, Barack Obama, Iman, Bono, of course, among others—with celebrated portrait photographer Annie Leibovitz at the helm.) I got George Bush, yes, a first on the cover of a usually anti-administration publication, with a prayerful Archbishop Desmond Tutu. You can guess who he’s praying for. (They have Condi Rice, too. Wipe that smirk off your face. You must understand, this is how Bono gets his philantrophic work done. He sucks up to the right people in power. I love Bono but he is human just like the rest of us.) All I can say is, I would have been happier with the George Clooney cover in my hand.

Okay, I’m off rambling more than usual. I just hope I get well by the weekend. My back is killing me from all this lying down. And I’m afraid my hard drive will give out from all this downloading. I’m also running out of VF issues to read. Mother! I need my drugs!

MY deepest condolences to the family of the late Renato Faustino, “Mang Ato” to all of us reporters who had covered the agriculture beat. Mang Ato was an old-time government publicist who endeared himself to the journalists who made it their business to investigate every piece of BS coming out of the mouths of his often lofty-minded bosses. (True, there have been one or two exceptional heads at the Department of Agriculture, the present dispensation not one of them, though.)

Mang Ato just did his job, disseminating information to the reporters, getting officials to explain themselves out of the messes they got themselves in, ringing up editors to ask for some support to the agency programs. Even when his beloved DA was dragged in the mud a few times in the last few years, Mang Ato never cast aspersions on the motives of the reporters or the columnists for the negative stuff. He knew they were just doing their job as well.

The last time I saw Mang Ato was last year, at a friend’s wedding. We had joked that he became teary-eyed because our friend was getting married for the second time. I imagine the buckets he would have wept if I had been the one who got hitched! But that was how Mang Ato was. He was always a softie, and I have never once heard him utter a harsh word about anyone or anything, even if he was the one put at a disadvantage. He was truly a friend we could always go back to for a few laughs as we reminisced about the good times at the DA.

Thanks, Mang Ato, for being the kind of person many of us can only hope to be.

(My column, Something Like Life, is published every Friday in the Life section of the BusinessMirror. Photo from BusinessMirror – nope, that's not my bed!)
Posted by Stella Arnaldo at Saturday, June 30, 2007