Some kind of fitness story 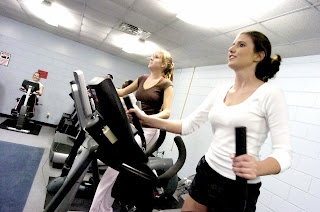 A NUMBER of my friends texted their congratulations.

Some, curiously, asked, “Ano’ng nakain mo?” which I don’t think has a proper translation in English. (The closest I can think of is “What’s up with you?” but in the tone that meant, “What the hell were you thinking?!”)

Anyway, what my friends were referring to was my sudden decision to enroll in a gym. Okay, don’t laugh. Yeah, yeah, it was a sperm of the moment decision, as I like to say. But bear with me as I try to entertain you with tortuous details of this life-changing moment.

When I went to the mall near my home, I had all the intention of purchasing a spare cell phone to replace my battered one, which has missing keys, and already unreplaceable as it is a Siemens phone. (An aside: I don’t know why Siemens gave up on the Philippines. Its cell phones were, quite honestly, pretty good workhorses, easy to operate, with designs that were actually ahead of their time. Very stylish. The company just lacked the right marketing strategy to sell its units to keep up with the competition. So Siemens has pulled out its service centers from the malls and now I can’t replace the keys on my S57. I am told that I will have to go all the way to Siemens’ head office in Mandaluyong or thereabouts just to have my phone repaired. Tama ba ’yon?)

Not finding the cell phone I had saved up for, and still having enough time on my hands before the hordes of people swarmed the building, I checked out the health and fitness floor of the mall. First, I went to a popular medical clinic to find out what its membership fees were, because I was due for an executive checkup; then, somehow, my pretty feet just brought me next door to the fitness center.

I’ve been to that gym before with Mrs. M, as she was a member, and I was aghast that there were so many people working out almost side by side. It was like walking around the mall on a weekend in the afternoon, and all you do is bump into other people. Which I absolutely detest.

But I was just curious, and inquired how much I would have to pay to be a member of this popular fitness center. Having gone freelance as a writer, I no longer have an excuse not to exercise. My days are flexible enough to have a fitness schedule and if I was serious enough, I could plan the rest of my activities around my gym time. I’m not really exercise-phobic. In fact, I loved doing yoga, and attended classes fairly regularly to strengthen my back which had given me problems in the past. But when I moved to Quezon City, I couldn’t find an instructor in my area that would teach in the afternoons, a schedule which I had become accustomed to, being a late riser.

Anyway, I was surprised at the rate that was offered to me to enroll in that gym, which cost just a tad over the amount of the cell phone I had been angling to purchase. The monthly dues are somewhat expensive but I was told I would be able to use any of the gym’s branches nationwide and even internationally. I was also told that from about 10 am to 4 pm, the gym would be virtually empty since everyone is supposed to be at work. So that solves my claustrophobia. Well, as you may have already concluded, I got sold on the idea, turned over my credit card for swiping, and committed myself to a year’s worth of fitness.

I would like to say that I enrolled in the gym mainly out of concern for my health. True, I’ve been feeling the tightness in my jeans’ waistband the last couple of weeks, and find myself out of breath sometimes when I walk short distances. My family has a history of hypertension and diabetes and I am probably at risk of inheriting these, so it’s as good a time as any to get back to exercising. Coupled with this is my being a foodie. I love to eat. And I know going to the gym would allow me to keep my weight down even as I continue to indulge my, ahem, healthy appetite.

Then again, as my Mader F surmised, there was a deeper reason for my going to the gym. Or maybe, a shallower one. It had to be a man. Guilty! Let’s just say, one night I suddenly realized I was absolutely attracted to him and, quite strangely, wanted to drown myself in his steady gaze. Ick! Ma-drama na ba?

Going to the gym is probably admitting to myself that I feel powerless under his sway and just want to look my absolutely fabulous best the moment I give up control. So there’s my fitness motivation, and maybe it’s wrong, but what the heck! It got me back to the gym, so it’s as good a reason as any. The women libbers out there can throw all their rotten tomatoes at me but I don’t care. I’m just a grrrl, noh?

Anyway, I hauled this tired but sexy body of mine to the gym for the first time in decades and found the experience quite exhilarating! Not wanting to unduly exert myself, I attended the yoga class for starters. After more than a year of not having any regular yoga practice, naturally I felt stiff all over. I couldn’t hold some of the asanas (poses) as easily as I did before, although I still remembered how to breathe correctly, so I didn’t end up panting and wheezing like the rest of my classmates. Mo-ching, my teacher at Mandala Spa, would have been proud as well of my downward facing dog. And toward the end of the class, I still managed to do my shoulder stand and easily dropped my legs at the back of my head while the upper portion of my body lay supine on the yoga mat. Aba, flexible pa din ang lola n’yo!

But, man, how I sweated buckets! For those who think yoga is easy and just for wimps, you have it all wrong. The asanas are very difficult, especially if you’re just starting out. Despite an air-conditioned room, you will perspire, and your muscles will feel like they’re being torn apart. Talk about feeling the burn. But unlike sports or other fitness exercises, there is no competition with others, only with yourself. You challenge yourself to perfect the pose at each practice, and with every effort, your mind is conditioned to focus on your breathing, your practice and your space.

After the class ended, I felt rejuvenated. I really missed my regular yoga practice. It was what my body and mind had been craving for all this time. Sure, my muscles are aching all over right now, but I look forward to going back to the gym again and perhaps trying out the fitness machines next time.

I’m not going to give out any lengthy sermons on the importance of health, the proper diet and exercise. Or how our relationship to our body should be sacred and should be of utmost priority. I’m pretty sure you will find your own motivation to exercise soon enough. And if it’s a man who gets you running to the gym, then embrace it. Perhaps soon, he might just be embracing you.

(My column, Something Like Life, appears every Friday in the Lifestyle section of the BusinessMirror. Photo from Maconstate University web site.)
Posted by Stella Arnaldo at Friday, June 08, 2007