Jim Turner and his hobbits

I haven't been to Hobbit House in Malate in quite a while. There was a time, I would hang out there and regularly watch many up and coming musicians and bands perform. (A number of them actually have gone on to great careers.) There were nights devoted to folk music, then sometimes rock, but my favorite were the Blues night where I could watch Lampano Alley starring Binky Lampano, or the Blue Rats growl their music for a wildly cheering appreciative audience.

I dunno how many times my friends and I had to remain standing, watching the bands perform bec. there were no more seats in the house. That was how packed Hobbit House was. The foreigners especially just loved chilling out in that joint bec. of the little people who served them, and rang up their tabs. 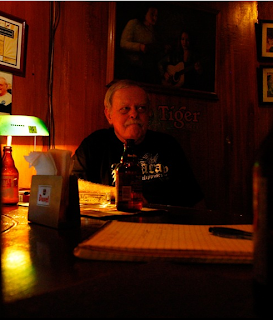 The guy who owned the joint is a burly American named Jim Turner, a former Peace Corps volunteer who eventually settled in Manila. I would often see him at Hobbit House (or at his other bar now closed called Remembrances) drinking and chatting w/ his favorite patrons. (Trivia: one of those patrons of 'brances was the presidentita, then just a senator, who drank her scotch w/ former journalist and now RP Ambassador to Greece, Bobbi Tiglao. I shall not name the others who participated in these drinking sprees w/ these two to protect their ahem, innocence?)

Anyhoo, there's a piece in the Los Angeles Times today featuring Turner and his hobbit family. It's basically a touching story of how man can make all the difference in the lives of the disenfranchised. A bar may not be much to some people, but for the dwarfs and midgets working at Hobbit House, it is home and family.

Click here for your good news of the week.
Posted by Stella Arnaldo at Tuesday, August 11, 2009