On the DLSU-ADMU basketball game

CONGRATULATIONS to the Green Archers for putting up such a fight when all the sports analysts where clearly betting on Ateneo's Blue Eagles winning the game easily. For a team like the DLSU Green Archers with so many rookie players, their play, 3-point shots, and assists were definitely impressive. (Mejo mahina lang ang rebounds kids.)

It was a very exciting game that put me on the edge of my seat. Even towards the very end, as the game went into overtime, no one was sure anymore who would win. With the game ending at 76-72 in favor of the Blue Eagles, that was not a bad showing by the Green Archers. Not at all. And by god, that boy Joshua Webb can play! Wow, I'm sure his lolo, basketball legend Freddie Webb was so proud of Joshua's performance yesterday. Woo-hoo! 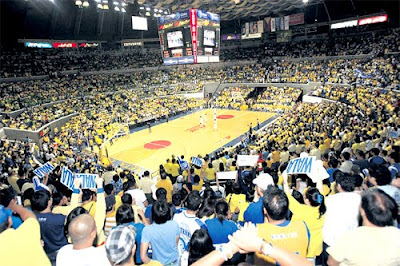 But what I'm most proud of is seeing both teams, as well as students, alumni, and other guests, casting off their team colors for once and wearing a solid yellow in tribute to former President Corazon C. Aquino who passed away last week.

As Bro. Bernie Oca FSC told Jiggy Aquino Cruz, grandson of the late president, who was in the Araneta audience yesterday, Tita Cory was watching the game and is now watching over us. Aren't we so lucky?

(Take a look at the yellow shoe laces of Team La Salle. Aren't you just proud of these kids?! Photo by Ryan Ong. More photos of our team in the Green Archers' blog.)

admu is always one step ahead of dlsu. game sportswear

Obviously, since you're a year behind in commenting on this. haha.

Thanks for sharing this post about DSLU-ADMU basketball game! Keep playing basketball and have fun!:) I love ateneo basketball team!:)