Arroyo decides 'not to continue' with ZTE deal — Bunye

SHANGHAI (VIA PLDT)—(UPDATE 2)President Gloria Macapagal-Arroyo has decided "not to continue" with the controversial $329-million contract for the National Broadband Network (NBN) project.

At a closed-door bilateral meeting, Arroyo took it upon herself to “explain” her decision to Chinese President Hu Jintao, her spokesman said.

“At this point, the President explained ‘the difficult decision’ not to continue with the NBN contract,” said Press Secretary Ignacio Bunye, recalling Arroyo’s words during the 50-minute meeting with the Chinese leader.

IT'S like we're all still waiting for the punchline..."not to continue"...for now?/just yet?/in the meantime? you fill in the blanks. Take note, the quote "not to continue" did not actually come from the Presidentita but from Presidential spokesman Ignacio Bunye. The verbatim quote from the terrifying little one was only the phrase "the difficult decision," in her talk with President Hu of China.

Bunye, a former journalist (which should make him an excellent communicator), was even too afraid to speculate what "not to continue" meant, lest he misconstrues his Presidentita's real intentions. How can the Presidentita quell the political noise she keeps complaining about when she can't even be clear about her policies? Aba, does she need a dictionary or thesaurus to make a serious and important announcement on an issue that is tearing her administration apart? All she has to say is "CANCEL" right? That is, if that's what she meant exactly.

But you and I know that's not what she really wants to happen, di ba? After all, the bribes have all been paid and probably spent (or deposited in Switzerland), so she is just leaving herself some legroom to squeeze in the controversial China deal at the last moment, just when everyone least expects it, when no one is looking. I wouldn't put it past her. 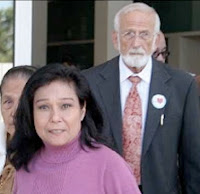 BUTI nalang me good news. Our own Superstar Nora Aunor is free! Yehey! After doing a Lindsay, her lawyers said Ate Guy no longer has a criminal record. Another little one...but super talented. "My brother is not a piiiiiiiiiiiig!" (Bow!)

Read on at Ate Guy forevah!