Phil. Star columnist Joanne Zapanta-Andrada reacts to my blog entry on her recent column which included an item on my late nephew, Jong Cariño. Her comments below:

hi stella! this is joanne zapanta-andrada and I am really curious what nasty things you wrote about my dressing the president. hahaha! more importantly, i want to say how much jong's death has touched my life. what i did not mention in my article is how many friends he had who responded immediately when they found out he had the accident. they flooded the hospital. he had soo many friends! how blessed he truly was! many great and famous people can never claim the same amount of true friends. i truly wish i knew him! i know he was a special person and i have become a better person to have been with him in his last moments on earth! (Oct. 31, 1:25 am)

tried to write you a couple of times but they never got through. this is joanne zapanta-andrada and i am glad that my last article held some meaning for you. maybe you can tell me what nasty things you said about my dressing the president. hahaha! but more important, i wish yo could tell me about jong. what i do know without a doubt is that he live a full life in his young age. within minutes of my calling his friends (using his cell) they all flooded the ER of asian hospital. many wealthy and influential people can only wish to have as many real friends as jong did. i think he was a very special person indeed! (Oct. 31, 1:44 am)

i saw the photo you posted re gma in a very "butch" outfit. that outfit is not part of her official wardrobe. no idea where it came from. probably it was a gift from a friend as it is not part of our collection. the operative word in my job as wardrobe adviser is "adviser". you can prepare the best outfit and advise her to wear it but if she has her mind set on her own idea of an attire that day , you do not argue with the commander in chief. (Oct. 31, 1:58 am) 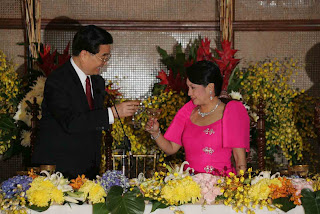 Now, this terno is gorgeous! (From the Philippine Embassy in China)

Hi Joanne! Apologies on behalf of Blogger which can be get a bit funky, thus, unable to register some of my readers' comments. If you wish to know more about Jong, I ask that you contact his mother Bingbing who also lives in your village, or my nieces who used to hang out with him. I can give you their phone numbers if you wish.

Anyway, thanks for writing in and yes, the entire Filipino nation forgives you for the fashion faux pas of the Presidentita which are not of your doing. Hehehe. However, knowing that you are her wardrobe adviser, fashion consultant, and stylist and seeing her photographed in several horrendous outfits, it is inevitable that you will get blamed. I would resign the job if I were in your shoes, since it certainly does not add to your market value at all being associated with a fashion victim. Hahaha! As my mother always likes to say, money can't buy you class (nor good taste, I may add).

Sorry, I know the Macapagal family is close to the Zapantas but truly, with all the problems this country is suffering from, the public should at least have an escape by being able to look forward to a fashionable head of state sana. I mean, look at how we Filipinos let the Marcoses stay on for such a horrific length of time? Ang gandah kasi ng Lola Imelda! Hahaha!

In fairness to you though, the Presidentita's ternos and Maria Clara outfits are really pretty and I'm glad that she has brought back these traditional Filipina dresses into the presidential wardrobe. I could never understand why Tita Cory banned the terno from her presidential closet just because Lola Imelda wore it so fabulously. (But how true is it that GMA got two for one by being Ninang to someone's wedding, thus incensing the bride's father because he had to pay for both? One of those allegedly ended up on the Sona stage. Oops!)

Btw, pls. tell your boss to get a new makeup artist if she already doesn't have one. I'm no fashion plate either but at least I know how to blend my foundation. (See GMA's photo a few entries down below.) Joskopooo! 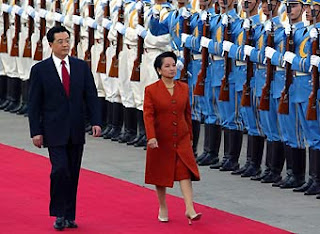 This is not! These long coats make her look even smaller. (Photo from China Daily)

Seriously though, I am glad that Joanne is among the very few who defies the stereotype of the fashion model. She is no dumbina this woman, having graduated cum laude from UP Creative Writing (tadaaah!) and having been able to reinvent herself as a photographer, columnist, and philantrophist. I've always known her to be "just" a fashion model (as if that weren't a difficult job as it is), looking pretty and glamourous in all those beautiful outfits by our celebrated fashion designers. Most of all I remember her for her creamy white flawless complexion, and no wonder, alagang VMV pala sya!

Btw, for someone who was so photographed as a model, photos of Joanne are non-existent on the web. I wanted to post one but well, I couldn't find any after googling endlessly. There is a nice piece on her though in HerWord.com.

Hmmm...I wonder what Halloween outfit the Presidentita has on today...
Posted by Stella Arnaldo at Wednesday, October 31, 2007